In this digital age, all users want quick information, and most businesses aim to give their users a better mobile app experience. Multiple mobile app development frameworks are available today to deliver a lightning-fast experience, and React Native is one of them.

React Native is a high-performance mobile app development framework used to build Android and iOS apps. Skype, Facebook, and Instagram are some of the world’s most famous tech giants, which have achieved stellar results using React native development.

Statista ranked React Native as the second most preferred cross-platform framework for developers worldwide in 2021. The following infographic offers insights. 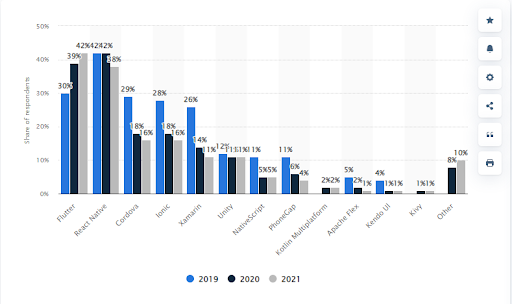 This article will discuss what React Native is and why you should consider it for your mobile app development.

What is React Native?

React Native is a simple-to-use framework maintained by Facebook and uses JavaScript as its core programming language. It is a versatile framework that supports development projects of varying sizes and belonging to different industry domains. This framework helps ease the complexities of the development process.

8 Reasons Why You Should Trust the React Native Framework

One of the notable advantages of using React Native is that it allows for a single codebase across both iOS and Android platforms. You can design a mobile application within no time using React Native development. As a reliable framework, it eliminates the necessity of starting from scratch when developing a project.

React Native has a widespread community of experienced developers delivering professional support. It maintains a pool of knowledge contributed by fellow developers and is constantly updated. Being backed by Facebook also makes finding new React Native developers easier due to its popularity and easy adaptability.

Cross-platform mobile application development has been a hot topic for years now. One of the most popular cross-platform frameworks is React Native app development, which enables you to write once and launch everywhere. It effectively eliminates the need to build a different codebase just because there are two platforms involved. Thus, adding convenience to the developers.

React Native uses a simplified codebase that makes it easier to change one object. To make updates, you have to modify its state first. That way, your app will be more stable and reliable than other cross-platform development methods. Additionally, high focus on styling, navigation library, expo-kit smart  use, etc. are important things to consider while developing mobile apps with React Native.

The framework is widely considered an ideal choice for developing a new mobile app because of its simplified codebase. With a few steps, you can incorporate new React Native-based components, views, screens, etc. React Native uses native APIs for rendering code, which helps deliver better-performing apps.

React Native supports third-party plugins. There are two types of plugins: Native Modules and JavaScript Modules. Suppose you want to add Google Calendar or Google Maps to your basic app. You can connect to any plugin with a Native or third-party module through React Native.

React Native has a core function of hot and live reloading. With this feature, the React Native programmer can work on the code changes in real-time and fix them while the application is loading. While hot reloading reloads only a specific area of the change, the live feature automatically reloads the entire application after making changes.

React Native lets you create unique UIs using pre-built components, such as Buttons, Pickers, Sliders, Switches, and more. You can also use TouchableNativeFeedback and TouchableOpacity to make your components. Many other Android and iOS-specific components are available to make it work efficiently on iOS and Android mobile devices.

React Native makes debugging more accessible because the code is similar across different platforms. This also makes updating the code for Android and iOS platforms easier. It can save time because the programmer only has to fix a bug once to have it work on all the systems.

To summarize it all, React Native is undoubtedly one of the most popular frameworks for cross-platform app development. Its benefits include high performance, compatibility, and a straightforward codebase. React Native is a complete package. It helps with stable and high-quality app development for iOS and Android platforms.

Additionally, Facebook’s backing gives it longevity and a strong developer community. If you are creating an app for multiple platforms, React Native should be your go-to choice.  Hire React Native developers for your business app development today.