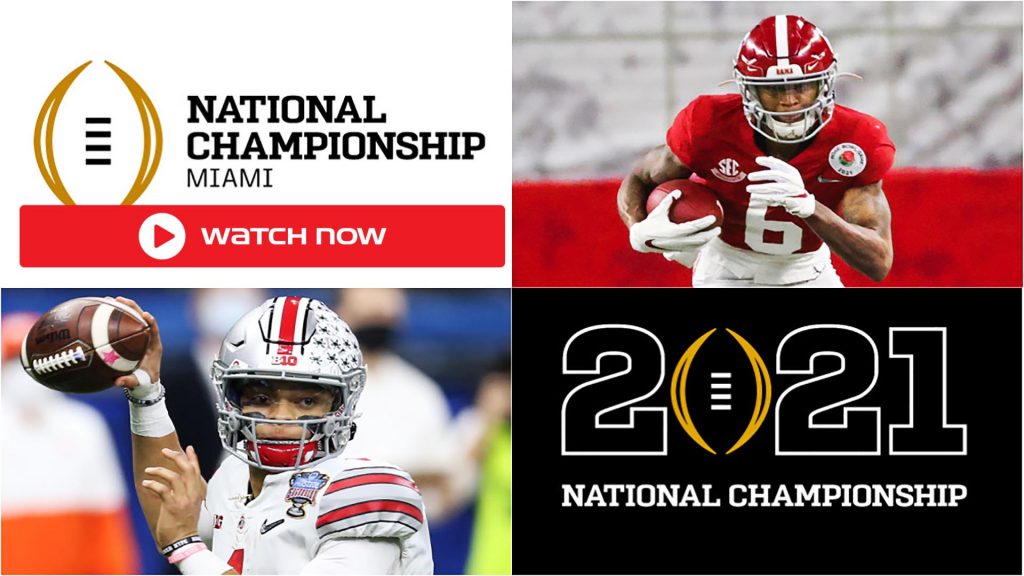 Ohio State vs. Alabama: How and where to watch and listen to the national championship game

We’ve finally reached the finish line of what has felt like a long, long season. Fresh off a dismantling of Clemson, Ohio State has its sights set on a national title. Only one obstacle stands between the Buckeyes and their ultimate goal… the Alabama Crimson Tide.

Questions remain about the health of the team after reports of entire position groups rumored to be dealing with COVID-19. While it seems many of those reports may have been overstated, a few will not play. We already know one who didn’t make the trip to Miami: Miyan Willams posted on Twitter that he wasn’t there. Either way, the Buckeyes and Tide have passed their final COVID-19 tests and the game will go on as scheduled.

So here we go. Sixty minutes for college football immortality. Only one can be crowned, and it doesn’t get any bigger than this… Ohio State vs. Alabama. If you are looking for information on how to watch or listen to all the fun, we’ve got it for you.

The Crimson Tide and the Buckeyes will face off for the national championship in a season that scuttled to the finish line amid relentless coronavirus throes.

College football is looking to crown a national champion on Monday night — and to punctuate a season that routinely dealt in controversy and so often teetered toward collapse during the coronavirus pandemic.

Top-ranked Alabama will meet No. 3 Ohio State at Hard Rock Stadium in Miami Gardens, Fla., the teams having dispatched their opponents, Notre Dame and Clemson, in the College Football Playoff semifinals.

Both bring mighty offenses. Their defenses are shakier than those of their predecessors. Alabama, the Southeastern Conference champion, and Ohio State, the winner of the Big Ten, are both facing questions about whether certain stars will be able to play. Both coaches are chasing history in strikingly personal ways: A win for Nick Saban, 69, would tie Bear Bryant’s mark for the most championships at Alabama, and a victory for Ryan Day, just 41, would give him his inaugural title.

The game will air on ESPN at 8 p.m. Eastern time. Despite questions last week about whether issues related to the virus might force a postponement of the game, playoff officials say the teams will be ready to proceed.

A public vaccination site at Hard Rock Stadium will close at noon on Monday, the state said, “to accommodate” the championship.

Players to watch: For excitement that is as compelling as it is predictable this season, look to the offense. DeVonta Smith, the first wide receiver since 1991 to win the Heisman Trophy, will almost assuredly be hard to miss, as will Najee Harris, the starting tailback who turned heads during the Rose Bowl with a breathtaking leap over a Notre Dame defender. But the offensive line, so often overlooked, makes things work for Alabama, so watch Deonte Brown, the 350-pound redshirt senior at left guard, and Alex Leatherwood, a senior who plays left tackle.

Something Alabama loves: Hard as it might be to believe after years of special teams struggles in Tuscaloosa, kicking (when Alabama must, of course). Will Reichard has hit all 13 of his field goal tries, as well as all 77 extra point attempts.

Something Alabama detests: The defense has intercepted a dozen passes this year — stellar by many standards but the fewest by an Alabama team since the 2014 season, when its campaign ended with a College Football Playoff game against Ohio State. (Alabama lost, 42-35. Ohio State went on to win the first national championship of the playoff era.)

Alabama’s warning light: It’s the same as Clemson’s was in the Sugar Bowl semifinal game on New Year’s Day. Facing an Ohio State pass defense that was the worst in the Big Ten in 2020, Alabama should be terrified if it struggles through the air with a quarterback, Mac Jones, who has completed 77 percent of his throws this season, and Smith, who has 1,641 receiving yards.

How Indiana Coach Tom Allen thinks Alabama can beat Ohio State: “Mac Jones is good enough — he’s an elite player — and that receiver corps is extremely talented,” said Allen, whose team came closer than anyone this season to defeating the Buckeyes. “The matchup is going to be this: If Alabama can’t run the ball against their D-line, that will be huge.”

Extra point: Despite a frustrating two seasons leading the Miami Dolphins, Coach Nick Saban will arrive in Miami Gardens with an 11-7 record at Hard Rock Stadium, between his N.F.L. and collegiate head coaching careers. But as Smith put it this month, location may not matter all that much: “Just spot the ball. I’m ready.”
No. 3 Ohio State (7-0)

Players to watch: Quarterback Justin Fields took a sack to his torso that knocked him (and perhaps a few of his ribs — the world may never know) out of place during Ohio State’s Sugar Bowl matchup against Clemson. He still finished the night with 385 passing yards and six touchdowns. Wide receiver Chris Olave and Trey Sermon, a running back, will remain key connections: Olave, who missed Ohio State’s Big Ten championship win because of coronavirus protocols, caught two touchdowns for the Buckeyes against Clemson, and Sermon has rushed for 524 yards in the last two games.

Something Ohio State loves: The defensive line. Seriously. Ohio State’s rushing defense is ranked second in the Football Bowl Subdivision, flying under the radar as weaknesses in the secondary allowed opponents to challenge the Buckeyes. Ohio State held Travis Etienne, the Atlantic Coast Conference’s all-time leading rusher, to 32 yards. The rest of Clemson’s rushing attack gained all of 12 yards.

Something Ohio State detests: Well, the secondary, which has been giving up nearly a dozen yards a completion. That pass defense will need to look far sharper when it’s facing the Heisman-winner Smith — plus the potential return of Jaylen Waddle, who was hurt in October but could someday be a first-round N.F.L. draft pick. (Alabama Coach Nick Saban has said Waddle’s status will be a game-day decision.) And then there’s the rest of Alabama’s deep pool of pass catchers, including its tight ends and running backs, namely Harris.

Ohio State’s warning light: As the Ohio State defense consistently rushes four from the line, it may require its secondary to hold up in coverage for a longer amount of time, especially given the strength of the Crimson Tide offensive line. Shaun Wade, the leader of the Buckeyes’s secondary and a top-ranked coverage cornerback heading into this year’s N.F.L. draft, will need to step up against one of the most potent passing attacks in recent college football history.

How Mississippi Coach Lane Kiffin thinks Ohio State can beat Alabama: “You have to be off-the-charts aggressive,” Kiffin, the former Alabama offensive coordinator, said in an interview. “Fourth downs, trick plays, tempo. You’re the underdog against an offense that no one has stopped. You’re going to have to try to outscore them.”

Extra point: Day has only lost once in 24 games as Ohio State’s coach: a playoff game against Clemson in 2019. The Buckeyes haven’t won a national championship since the 2014 season — but they beat Alabama, 42-35, that season in a playoff semifinal.

Alabama breezed through the regular season and college football’s semifinals, surviving a solitary scare in the Southeastern Conference championship game to reach its expected destination.

Ohio State wasn’t exactly a shoo-in with its abbreviated schedule but resoundingly proved it belonged in the College Football Playoffs with a semifinal thrashing of Clemson.

The Buckeyes and Crimson Tide traveled different paths to get to Monday’s title game at Hard Rock Stadium in South Florida, but both had to navigate the challenges of a pandemic-altered season

“I know this has been a little bit of a trying year for a lot of folks,” Nick Saban, the top-ranked Crimson Tide’s coach, said Monday.

It’s not a finale that could be taken for granted.

No. 3 Ohio State’s odyssey included an abbreviated Big Ten season with three games canceled because of COVID-19 issues, including the Buckeyes’ own outbreak.

“This team, this program, we persevered through so much,” Ohio State running back Trey Sermon said Monday. “To have the opportunity to play on such a big stage, it means a lot to us.

“We’ve been through a lot. I mean, we fought to just play, and just to be able to get the job done, to make it to this level, it just means a lot to us.”

The Tide (12-0) advanced with a 31-14 win over Notre Dame in the Rose Bowl, played in Arlington, Texas not southern California in yet another example of just how different this season has been.

Before that Alabama navigated 11 straight SEC games, including wins over three teams currently ranked among the top 11 before facing Notre Dame.

The Tide also won the Iron Bowl against Auburn with offensive coordinator Steve Sarkisian — who takes over the Texas Longhorns program following the game — running the show while Saban was sidelined by COVID-19.

In addition to Sarkisian’s imminent departure, Alabama has to take care of some Heisman Trophy business while preparing for the matchup with Ohio State. Both wide receiver DeVonta Smith and quarterback Mac Jones are among the four Heisman finalists, along with quarterbacks Trevor Lawrence of Clemson and Kyle Trask of Florida.

Smith isn’t interested in talking about the award being handed out virtually on Tuesday, saying his focus is on preparing for the Buckeyes.

“Right now I’m not really worried about the Heisman Trophy,” he said.

Monday’s game is a rematch of a semifinal game in the first College Football Playoffs six years ago. Ohio State (7-0) won that meeting en route to the national title.

There were questions whether this Buckeyes team deserved to be in CFP, but Ohio State routed favored Clemson, erasing sentiments that another Tigers-Crimson Tide title showdown was all but inevitable.

If Smith shared those expectations, the Alabama wide receiver kept them to himself.

“I mean, I’m not part of the committee, so I have no say-so in who they put in and who they wanted to put in,” Smith said. “At the end of the day, we just show up here, practice, and get ready for whoever the next opponent is.”

The big question for Ohio State Monday was the health of quarterback Justin Fields, who took a vicious shot to the side in the first half against Clemson.

Buckeyes coach Ryan Day didn’t give details on the nature of provide any detailed updates Monday on the QB’s injury but said: “I definitely expect him to play.