While the pandemic has slowed business for many executives, Aron Govil, CEO of Ducon Technologies, has been quite busy, running his anti-pollution business and writing a politically-themed book (under the pen-name Arun Govil) called A Nation of Sheep Will Believe a Trump.

“My company supplies a wide variety of technologies and equipment related to reduction of air pollution from industrial sources, including greenhouse gases such as carbon dioxide,” he told Programming Insider in an exclusive interview. 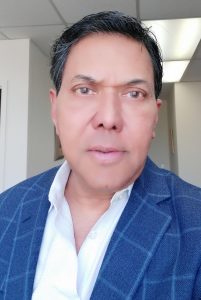 “The Covid lockdown caused many manufacturing facilities around the globe to halt to a standstill, derailing the entire global supply chain. The supply of raw materials and ingredients to the manufacturing plants was badly affected, which hampered their production, reduced demand and forced them to shut their manufacturing plants.”

The unprecedented global crisis forced most manufacturers in all industries around the globe to reduce capital expenditure in new projects and expenditure on upgrading operational equipment, Govil acknowledged.

“All this resulted in lower revenues for our business,” Govil said. “This triggered a chain of events, including a sharp decline in revenues and cash flows. We employ highly skilled workers such as engineers who are difficult to replace and hence had to carry them during the pandemic which put financial burden on our operations.”

In order to survive, Govil was thrilled to receive PPP loans. “Beyond that, there was not much we could do, but to wait it out and hope that things get back to normal once the pandemic is over. We utilized our own savings and funds to ride through and are now seeing signs of recovery.”

Nevertheless, there are still substantial shortages of materials such as various types of steel—the prime raw material for Govil’s products.

On a brighter note, Govil is still able to connect with his clients. “We are finding that more of our clients are now able to work through online meetings and conduct project review meetings with documents digitally than before. Prior to the pandemic, our engineers used to travel a lot more for sales and engineering meetings to the customer offices; however now all that is done through WebEx, Microsoft teams and DocuSign, etc. I think this trend will continue.”

In his spare time, Govil was hard at work, researching and writing his first book, A Nation of Sheep Will Believe a Trump. 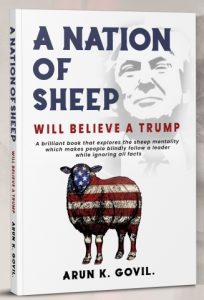 “I have been a patriotic citizen throughout my life – ready and willing to give my all for my adopted homeland and beloved country. I am a creative person as I have in the past produced, financed and directed some Bollywood films,” he said proudly.

Govil never had any aspiration to write a book, but felt compelled.

“Over the years, I have become passionate about our country’s politics and the state of its affairs. Seeing the start of Donald Trump’s presidency alarmed me and I started to feel that our democracy might be in danger if he continued for a second term, due to his authoritarian and autocratic beliefs. Hence, I wrote this book to get my views known to as many people as possible.”

Trump’s presidency “exacerbated” the polarization in our country and Republican politicians, who blindly and faithfully followed his every command, Govil asserted.

Seeing how Trump was able to mesmerize people “saddened” Govil’s heart. “People have stood by his side, highly educated or not, through thick and thin, believing every false narrative, racially divisive rhetoric and conspiracy theories promoted by him and his right-wing media. I am simply amazed at the ignorance of so many Americans and politicians who have sheep mentality and thus live in their sealed bubble of misinformation devoid of reality.”

Govil is worried Trump will make his return four years from now, “I am very concerned about the disparity in political knowledge of American voters due to dumbing down of America.”

He continued: “Trump’s first term has shown that the current U.S. constitution is of no help against the dangers posed to American democracy by ignorant voters and an authoritarian politician. By the time these people realize that they have supported the wrong candidate, the American democracy may very well be dead.”

Govil has felt hopeful with Biden being president.

“There is an old saying that you can never please all the people all the time. No president can make the entire country happy. Some people think he is doing good while others think he is not. But the important point is that under Biden, we are sure that our country is not moving towards a dictatorship. The oldest democracy is safe for now.”