Are you wondering how long does it take to get to space? Well, this journey is not at all short when compared with journeys we take down here on Earth. Besides, getting there doesn’t mean that you could live without air, water, and food. Your body would function just the same, and you would have to satisfy its basic needs, just like you would back home. These needs are fulfilled for astronauts from the International Space Station (ISS) by using supplies that are either recycled onboard the station, such as air and water, or are brought from Earth. Growing plants aboard the ISS might play a vital role in how humans feed in space, just as it does on Earth, but so far, this plant-growing project is still at its early stages. But first things first — how long does it take to get to space, and where does it even begin?

How long does it take to get to space?

The officially recognized space border is the so-called Karman Line, named after Hungarian physicist Theodore von Kármán. This line is just 100 km (62 miles) above the sea, marking a point at which we perceive the edge of space.

Now that we know how far is space, you might wonder how much time it takes to get to space, of course. Right now, the time it takes to reach the ISS may range anywhere from six hours to about three days, depending on what each mission plan is and what spacecraft is used. For example, Apollo 11 astronauts got to the Moon from Earth in three days. This is not at all long, considering how dangerous their mission was at the time.

How to get to space? 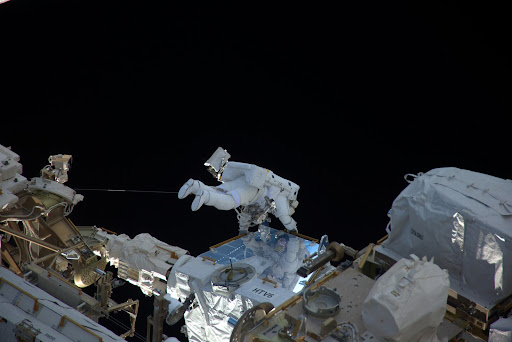 Knowing how long it takes to get to space is not the main problem while getting there, and a lot will depend on the flight trajectory and spacecraft used. Orbital Today has a very detailed account of how long it takes for modern and previous spacecraft to get to their destinations, but we will cover only essential info here. After all, it is not only about getting to space; it is also about surviving there.

And if you were in space, where would you live, we might ask. Only getting to space would not be enough for you to make it out there. You would need to “set camp” in your spacecraft or get aboard a space structure that was specially built for residing and working in space, such as the ISS or the TSS. Don’t think for a moment that being in space has taken all your cares away. As mentioned above, you would still need to survive as you did on Earth, which means you would need to breathe, eat and drink water, among other important things.

How much food and water do astronauts need?

Food, air, and water in space are essential for astronauts who already got to space and now must live there for a while. They are still human, so they must breathe air just like people left back on Earth, not to mention that they still must eat and drink water. While astronauts on the ISS breathe air from the Environmental Control and Life Support System (ECLSS), eat food brought from Earth or grown on the station, and drink recycled water, they still lead a normal life when it comes to satisfying their basic needs. According to NASA, an average ISS astronaut’s food consumption is 0.83 kg a day, but longer missions may call for increased food and water supply. NASA claims that all sustenance packages are calculated individually for each mission and its crew, so there is no fixed-weight ratio.

For example, knowing how long it takes to get to space and that the journey could take up to three days, you’d need to be prepared with provisions for this journey, too. Your spacecraft would need a perfectly functioning ECLSS, and you would get food and water rations with you. While astronauts on the ISS cultivate their tomatoes, lettuce, radishes, Swiss chard, and some other vegetables on the station, they still get most of their food from Earth. Regular missions are getting them what they need. Most food they get is either pre-cooked or ready-to-eat. Their meals are customized for providing the necessary amount of nutrients and energy needed to live healthily.

Today, we witness an unprecedented pace of space tech development, though. So, soon enough, time to get to space may shorten drastically, and if NASA is successful with growing food in space, we not have to get as many Earthly supplies onboard as we used to.