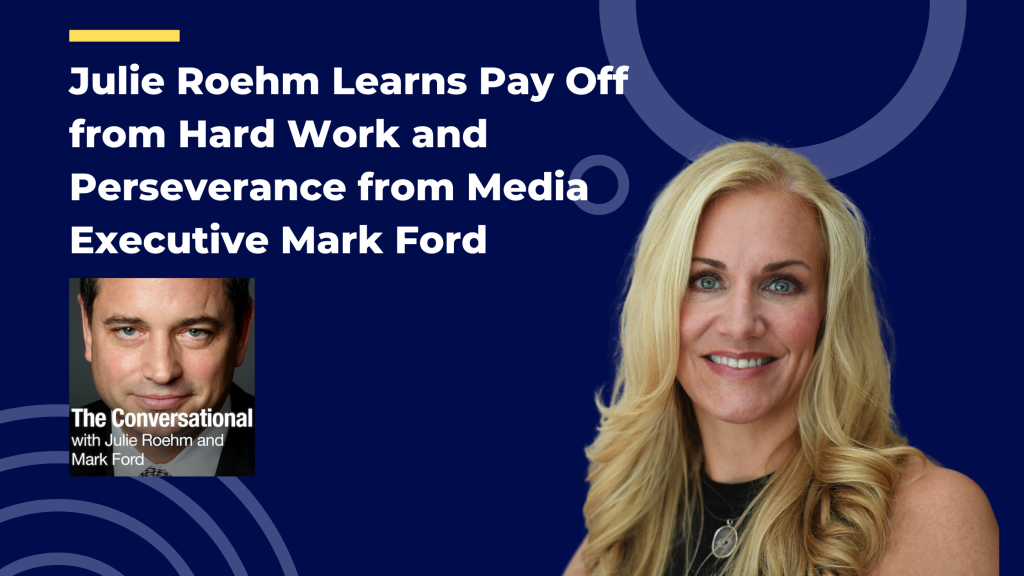 A storyteller in her own right, Julie Roehm uses her podcast platform to gather insights from others across industries for inspiration and learning. One conversation she had with media executive Mark Ford, typified this experience. Ford recounted the personal story of how he rose to success from employment at the family steel mill to his dream job working as an executive in the media industry. Roehm’s conversation with Ford revealed the importance of determination and hard work as well as the power of character qualities over achievements or impressive resumes to transform the work of the business.

Ford did not travel an easy road in his upbringing. Growing up in a blue collar home in Eastern Tennessee, the family relocated to Cleveland where his father entered the construction business performing millwright work. His mother worked as the vice president of a bank, slowly working her way up the corporate ladder. From both parents, Ford learned the value of sweat equity and, when his father was no longer able to work due to workplace disability, Ford filled in his shoes working as a millwright in order to pay his way through college at Kent State. Roehm noted the important place that Ford’s family held in influencing his decisions to work hard in his own career and take the opportunities that were presented to him in order to improve his position.

During his studies, Ford quickly came to realize that he had an interest in the advertising industry. Always one to aim high, he did his research and discovered J. Walter Thompson was the leading agency at the time. He decided then and there that he wanted to become an advertising executive and work his way up the ranks into a leadership position. To improve his chances of getting noticed, he even helped create  a team to compete in the national competition by the American Ad Federation. There, he met Bart Cummings, who eventually offered him a job with Compton Advertising. Using this opportunity as a foothold in the industry, Ford eventually made contact with the team at JWT in Chicago, where he was offered a position in recognition of his skill and his determination to succeed.

Ford explained the state of mind that propelled him to achieve this dream as being one without intimidation. He was always comfortable talking with people regardless of their corporate rank and approached every conversation with honesty and genuine interest. The result was that he gained the ear of executives throughout his career who took an interest in his hustle and his tenacity. Rather than selling himself on the premise of tangible achievements and qualifications, Ford  took a different approach. “I talked about what my skill sets were and how that would benefit them,” he continued. “No one’s there to make your dream come true. Your job is to tell them how you could help make their dreams come true, and what you can do to help them is really the focus.” The result was a 32-year stint with Time International where he held a number of different positions reflective of his own personal and corporate growth as well as business needs.

Ford was willing to do the work needed to climb his way to the top. With his background and hard work ethic, no task was too far below him as he learned the industry and paved the way for the career he was shaping for himself.  During his time at Cosmopolitan Magazine, Ford’s boss set him out into the streets directly making calls and approaching clients face to face in a sales role. He considers this a learning experience where he discovered the benefits of actually making contact and facing clients. “The key is asking good questions and understanding what the client is trying to accomplish and then solving for that,” Ford explained.

The road to success was not easy, but it was straightforward to Ford. In spite of his own challenges, including a struggle with dyslexia, Ford developed a talent for adapting and communicating in his own way. He explained, “You just have to adjust and become driven because you’re proving people wrong about their views on you. You want to prove them wrong. I’m never satisfied, which is a curse. It’s good for the companies that I worked for. But for me, it’s like, ‘Give it up, come on.’” This was a mentality that Julie Roehm could personally relate to, commenting that the impetus to never give up is the sign of a truly successful person.