Don’t you love it when new games are released for Super Nintendo? Ok, sNESert Golfing is not brand new, because the creator Brad Smith released this game for NES in 2020. However, he recently ported the game to the SNES Roms, and bam, a new game. Not only that, it’s a game concept that doesn’t exist on this console yet. There are some golf games, but none of them is played from the side. The game is a one-man project, so don’t expect excessive epic, but a solid game with an addictive factor.

The game doesn’t come with any plot or great design either, it’s just plain golf with no frills and that’s on purpose because the game sees itself as a port of Desert Golfing, which also focuses on minimalism and is available on Steam. This is exactly what was wonderfully adapted. 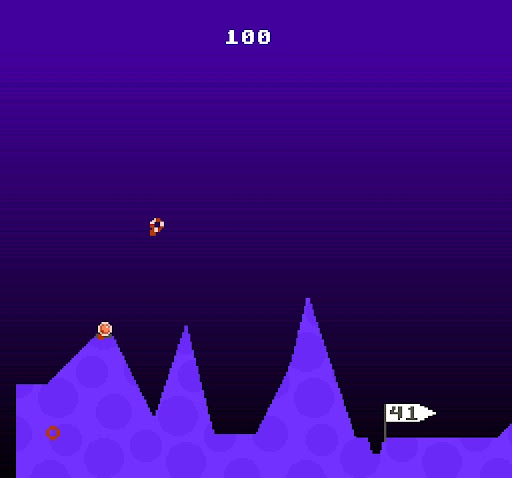 This may seem lame at first, but the focus of sNESert of SNES games roms on TechToRoms.Com Golfing is on playing with the physics and getting the balls in the holes. This forced puzzle creates its own brain teaser atmosphere, similar to 2048.

Absolutely minimalist and almost devoid of textures, but on purpose. So is that good or bad? I have no idea, minimalism wasn’t a very common concept in the SNES era, so there are few comparisons. 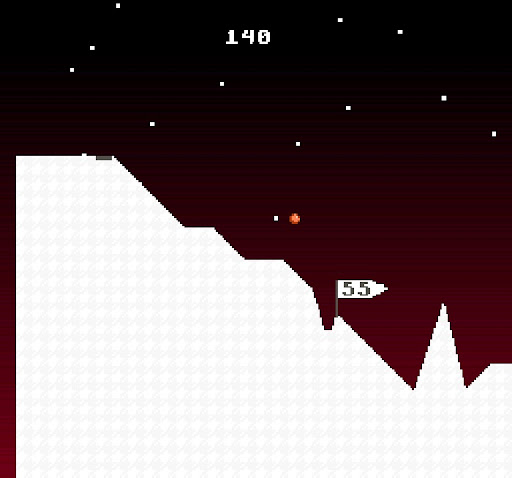 sNESert Golfing therefore definitely has the advantage of not having any performance problems. The ball goes its way smoothly and both rain and snow pelt down in a relaxed manner. I like it, even if this simple aesthetic is difficult to evaluate.

But what I seriously wonder is why there is this empty stripe on the left edge. Maybe this has to do with the fact that it’s an NES port.

Well, it’s golf, but not viewed from above or from the 3rd person’s perspective, as in Mecarobot Golf, but from the side. This leads to a different gameplay.

The focus is completely on determining the right angle, and the right swing strength, and paying attention to the terrain, sometimes also taking into account weather influences such as rain, ice, etc.

Here, too, sNESert Golfing is designed very simply and transparently, but is by no means boring. The number of levels or golf courses is very high and far exceeds 100. Playing around with the physics and the resulting changes makes up the main part of the actual gameplay and brings with it a lot more complex than you might think at first glance. 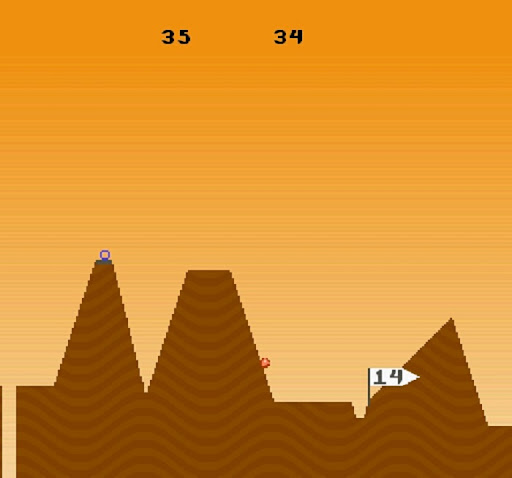 Unfortunately, you cannot save, so you have to save using the emulator or play through the game in one go. But it is possible to gamble in tournament mode with up to 4 players.

sNESert Golfing does not have any music. This is generally very bad, because even Desert Golfing has very relaxed, theatrical music that winds its way around. I’m not sure why that is, but at least it’s a relaxed way to listen to your own music. On the other hand, the few sound effects that are available are very good and fit throughout.

Good and simple. You understand everything quickly. You adjust the direction of the shot and the strength of the shot, you can do that with either the coarse or the finely calibrated shot and the ball is already flying. However, you will need a lot of instinct to be able to estimate the impact strength well.

sNESert Golfing is an extremely simple game, both in terms of play and design. But this golf game can inspire, similar to other puzzle games. Because it’s primarily about thinking through how to get the old ball from point A to point B with as few shots as possible. I caught myself really thinking longer than I had to at some points.

In addition, the game comes with a really large scope, which you probably cannot play through in one go, as it is time-consuming. There is also the Tournament mode, which changes the challenge a bit and you can also tackle the whole thing with several players, in contrast to Mecarobot Golf.

The purely numerical rating is below average, but you shouldn’t let that deter you from playing sNESert Golfing. That rating mainly results from the fact that the game was originally programmed for NES and therefore simply does not quite stand up to some quality standards, but these are only graphics and music.

In terms of gameplay, sNESert Golfing is a fine game that takes the player on a long but not long journey through many golf puzzle levels and makes them masters of golf shot physics.