WordPress version 5.8 is to be released on July 20 with many features. In this article I will show you what new features were released in WordPress 5.8.

Mainly the release will give the users a new feature called ‘Template Editor’. The template editor is a new tool that allows the end user to create their own templates apart from using the post-editing screen.

This feature would be considered to be the future for WordPress where it hands over complete design control to those who need it. The downside of the WordPress 5.8 is that users will not have control over the theme’s header, footer, and other template parts. Rather than that it gives you a blank slate where users can create their design they want.

The new version of WordPress 5.8 introduces the first full site editing tools and it is called template editor. The template editor is a special mode where the user is allowed to create, assign and edit block templates to specific posts and pages.

In this demonstration, I will showcase the following modules in the upcoming version of WordPress. They are,

You can now easily create your own template by using this feature in the upcoming version. For example, if you want to make your own blank template or a landing page, everything can be created by this editor. You can create the template without using the header and footer. It looks like the early phase of WordPress but it has many themes.  Now, I will just show you how the template editor works.

In the above process, the new template has been created called Testing. Once you are done with creating the new template, the template editor screen gets generated which gives you the option in template creation.

The Query loop block is a new and important feature in WordPress 5.8 where it helps in displaying the recent post first and it works as a loop. Through this feature, users can create their own custom loop and that means you can loop through your posts and display them. The posts could be displayed by applying the filters by category.

In the previous version of WordPress, users should depend on the external plugin to apply the query loop. But now it will be more comfortable for users because this will be inbuilt in the upcoming version. Now I show how this query loop works.

Type ‘Query’ in the add block menu. You will get the default template of the query loop.

There are two different views available for displaying the posts using the query loop. One is a grid view and another is a carousel view. 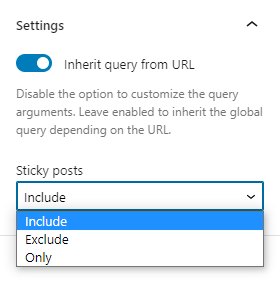 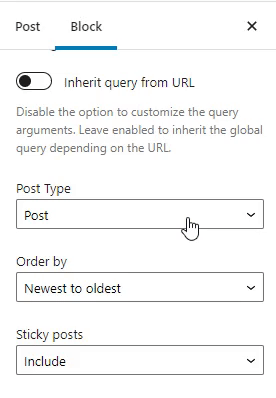 Once, you disabled the inherit query from the URL, the manual options to create the query will appear. The post type gives you three options: post, page and product. Based on the post type, you can order the type by new to old, A to Z and vice versa of both. Then include or exclude or keep only the type that can decided on sticky posts. 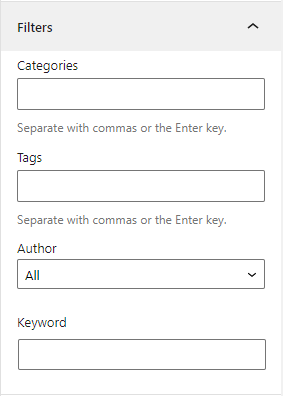 In addition to the settings, the post type could be filtered by using the categories, tags, author and using any other keywords.

The above options help in aligning the query block as per your need. You will get additional options in the end.

The above screenshot shows you the way to find the parent column among two columns. It is applicable for the columns above two.

Another option added to the top left of the screen is the list view. It helps in identifying the height of the browser, it shows the blocks in the current page.

In addition to all, you will get one more option to colorize the image using the duotone filters. Using this, the image can be easily modified as per your theme. I think this option would be the best one among the other features used for images.

You can now use any block in your theme’s widget areas using the widget screen. In the upcoming version of WordPress, there is a separate area for editing the widgets. It is just like a Gutenberg editor; you can add your blocks.

Overall, some great experience and improvements to WordPress 5.8 out obviously already in Gutenberg. But it looks fine and attracts more people to use and apart from that the user will get a better experience in WordPress.