A lot of people hold and trade crypto with the help of crypto signals, and this fact is well known throughout the world. Most of them do it to get an additional $1,000 or more, but some people make good bets.

Today we will talk about celebrities in crypto – some of them just promote different services, but there are artists who invest in crypto coins and earn.

Ashton Kutcher: from Actor to Investor

Kutcher is a longtime crypto fan and investor. In 2010, he invested in the e-sports startup UnikoinGold and co-founded the A-Grade Investments venture fund. The company’s portfolio includes Spotify, Airbnb, and Uber, as well as BitPay. Later, the actor spoke at the TechCrunch Disrupt 2013 Conference. Kutcher said that bitcoins were becoming more popular, and he was not mistaken.

But it didn’t end with Bitcoin. In 2018, Ashton and partner Guy Oseary made a donation to TV host Ellen DeGeneres to the Wildlife Fund. The $4 million donation was made in XRP according to Coinformant.

Serena Williams, unlike Kutcher, did not advertise her crypto activities or best Bitcoin robots. On April 17, 2019, the tennis player published on her Instagram account information about the Serena Ventures fund she created. It turns out that Serena founded the fund back in 2014 and regularly invested millions of dollars in various projects, including the leading crypto exchange Coinbase.

Serena’s spouse, Alexis Ohanyan, co-founder of the Reddit portal and the fan of IT outsourcing, also supports the cryptocurrency. He became one of the first investors in Coinbase, which is supported by his wife. Ohanian says he invested in Coinbase in 2011. In May 2020, Ohanyan predicted a “crypto spring” and highlighted that he didn’t plan to stop investing:

“Part of my fortune has been in cryptocurrency for a long time, and I love it. I don’t want to change it.”

Madonna uses cryptocurrency to donate. Raising Malawi, founded by the singer, has been helping orphans in Malawi since 2006. And in 2018, shortly before her 60th birthday, the singer partnered with Ripple to raise funds for the fund. Of course, the collection was carried out in cryptocurrency.

Apparently, this charity event was a gesture of goodwill on both sides. Skeptics asked Ripple CEO Brad Garlinghouse if the company paid Madonna to advertise. Garlinghouse replied that the only reason for supporting Madonna was good intentions.

The famous rapper Snoop Dogg also collaborates with Ripple. In 2018, he spoke at the XRP Community Night blockchain party. This was not the rapper’s first collaboration with crypto companies. Snoop Dogg’s name was first associated with cryptocurrency in 2013. The singer posted a tweet where he offered to buy his new album X for bitcoins. At first, everyone thought this was another rapper’s joke, but after retweets from BitPay and Coinbase, it became clear that the offer was quite real. 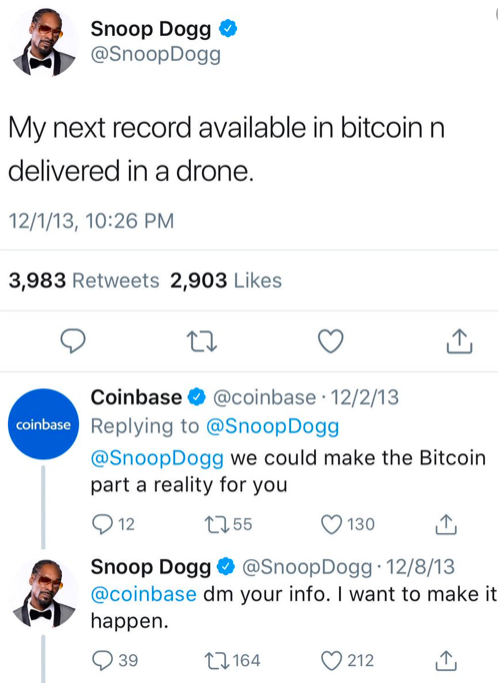 In 2017, Dogg became an investor in the online broker Robinhood. The company strives to make getting tokens as easy as ordering a taxi. Together with the rapper, Jared Leto and Mark Andersen became investors.

In late February 2020, 90s action star Steven Seagal was fined by the US Securities and Exchange Commission (SEC) for promoting cryptocurrency on social media. Seagal used to pay $314,000 and was banned from promoting any currency – digital or otherwise – for three years.

Seagal “tried to hide from an investigation that he was promised $250,000 in cash and $750,000 in B2G tokens in exchange for promotions,” the SEC said. “Investors who took notice of his ad had a right to know about the payments that Seagal was receiving in order to truly appreciate his impartiality.”

Seagal became an advertising agent for the Bitcoiin2Gen brand in February 2018. In the announcement, where Seagal was called “Zen Master,” the company stated that Seagal absolutely agreed with the company’s mission. Segal began promoting bitcoin a few months after the Exchange Commission categorized the cryptocurrency as security. Bitcoiin2Gen received an order in March 2018 to end its “fraudulent offering of unregistered securities in violation of the Securities Act.” Seagal’s term as a brand ambassador ended the same month, Coindesk reports. 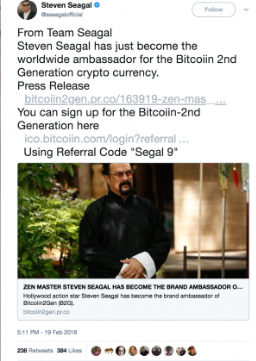 According to federal law, any person advertising cryptocurrency must also indicate all types of compensation they receive for promotion. According to the SEC, Seagal did not. Seagal did not acknowledge or deny the SEC’s findings, but promised to pay the $157,000 he earned from his deal with Bitcoiin2Gen; this amount is about 20% of the fee that he should have received in currency from Bitcoiin2Gen.

Investing in cryptocurrency is beneficial for the stars themselves and crypto companies. The win-win strategy is at work here. The investments of the stars increase the recognition and popularity of tokens: people follow their idols, no matter what they do. In turn, investors increase their fortune by playing on the growth of cryptocurrencies and stocks.

Celebrities try to invest wisely because not only their money but also their reputation is at stake. But so far the cases of Ashton Kutcher and Serena Williams are only exceptions. More often, celebrities enter into contracts with startups to become their face or brand ambassador, rather than an investor, as, for example, Steven Seagal did.