Each character in the winding symbol correlates to a letter of the alphabet or any other sign on the keyboard, as well as its own manner of representing windings.

It implies that windings may be used as a fun way to transmit coded messages, and anyone who gets them can translate them back to their normal phone. 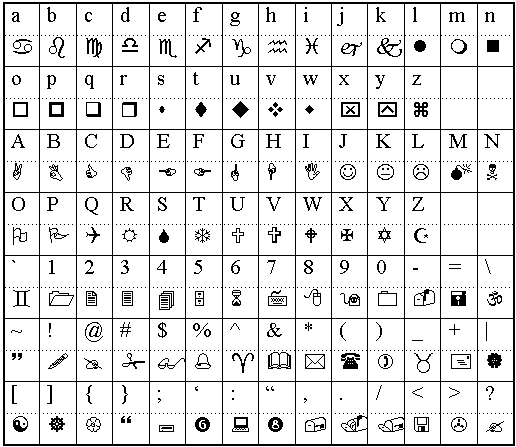 Webdings arrived on the scene in 1997, seven years after Wingdings. Looking at the symbols contained in the typeface, it’s apparent that Microsoft intended to modernize its dingbats.

And, for many years, while processing power was still substantially inferior to what it is today, the typeface performed an important role online.

Webdings was utilized for communication in a variety of ways, from indicating an email link with a speeding envelope to putting a “no-pirates” symbol in an email for a chuckle. However, it did not last.

The introduction of much greater processing power, the simplicity of dealing with pictures, and the popularity of GIFs and emoji have pushed Webdings to the back burner. There is also gaming localization companies, which offers a offer a complete range of game localization.

Wingdings, according to some font lovers (and conspiracy theorists), has a sinister side in addition to its wacky public persona. Since the early 1990s, it has been known that when you input “NYC” into Wingdings, you receive a skull-and-crossbones, a Star of David, and a thumbs-up sign, which many people have taken as an anti-semitic message.

Microsoft has categorically refuted these allegations, claiming that the connection of symbols and letters was mostly coincidental and that they were not, in fact, inciting Wingdings users to murder Jewish New Yorkers.

There is one major flaw: Q33 NY was not the flight number of either of the planes that crashed into the towers. AAL 11 and UA 175 were the numbers. People, on the other hand, are always seeking hidden meanings.

They discovered them not only in Q33 New York, but also in “MILLENIUM,” “GEORGE W BUSH,” and “Osama Bin Laden.” While most of them have been disproved, there are still individuals who believe Wingdings are prophetic or supernatural in nature.